Recession Or The Next Great Depression? How To Survive And Thrive Afterward 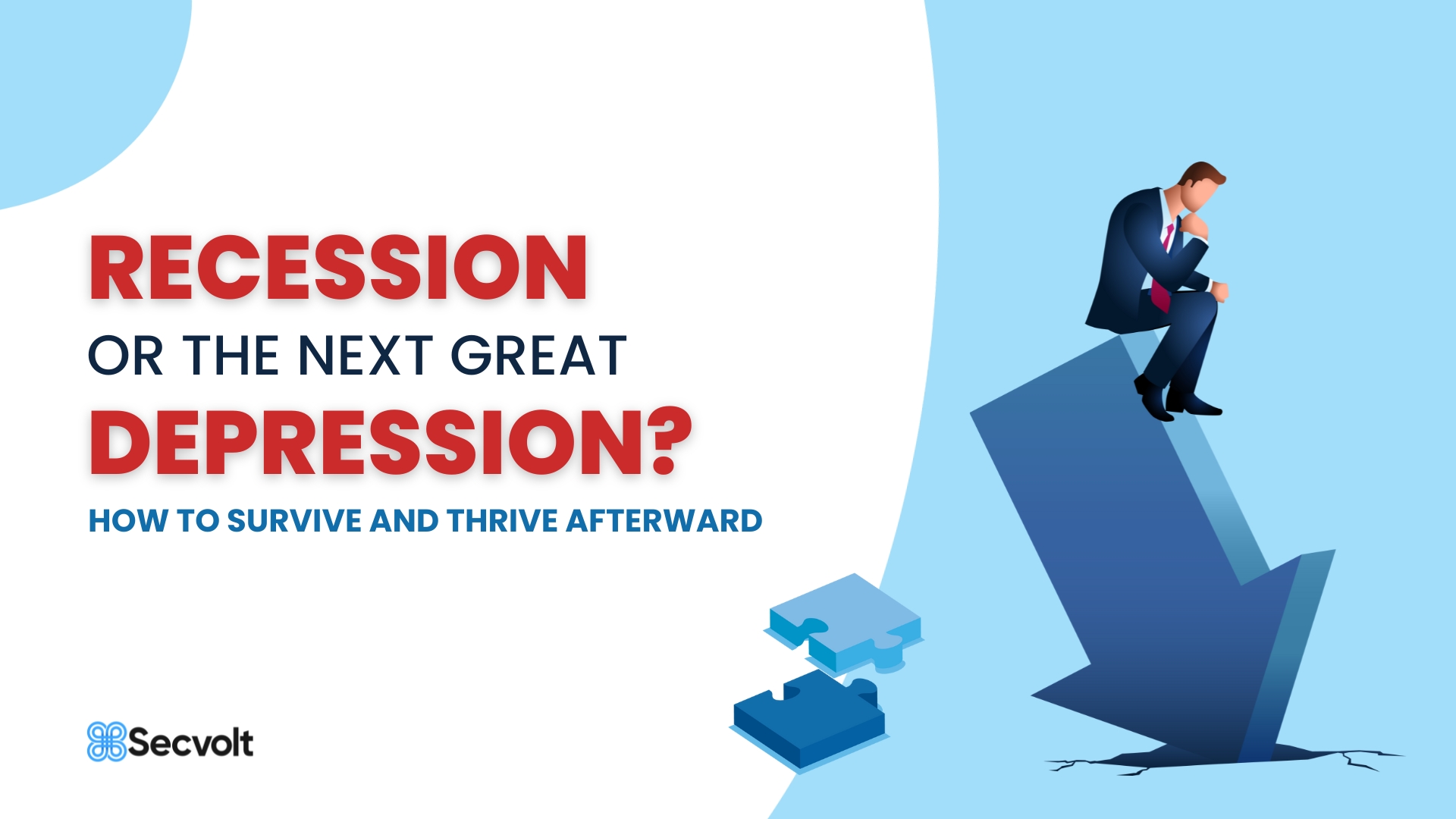 History has all the answers to our questions. Be it World War, Hitler, or the Great Depression. These historic events have something to teach us, and the individuals who have witnessed or experienced such catastrophes are the human teachings that we acquire from the survivors. One of these survivors is Tamata san, who must be about 110 years old. From wars to pandemics to economic meltdowns, she has seen every possible thing. In this brutal era, she is a link to the past, and as the situations are arising, she might face another economic crisis soon.

Mentioning the economic crisis, what are we up to? A recession or depression? Let’s start from the basics to know how these economic downturns ignite.

Recession: Definition And Its Causes

A recession is declared when a country experiences negative GDP growth for two consecutive quarters, indicating that the economy is contracting rather than expanding. A recession lasts at least six months, but no maximum length has been established.

So, can we detect whether we are stepping into a recession that could become a more significant depression?

Several statistical tests and proprietary models used by forecasters and analysts can be considered recession indicators because they are regularly reported or calculated and help us in recession planning. These recession indicators provide future information about the impending economic meltdown.

The following are the indicators of the Recession.

Each of these indicators tells us whether we are in or heading toward a recession. The next crisis mentioned in the introduction was the Great Depression which Tamata San had to face. We need to clear our concept of what happened then and what is the current scenario and how history is repeating itself.

The Story Of The Great Depression

The Great economic downturn lasted from 1929 to 1939 and was one of the most severe economic crashes in history. It began as a recession in America in 1929 before spreading globally, most notably in Europe. With any long-term economic crisis, the Great Depression was precipitated by a series of events, including the 1929 stock market crash and the severe drought of the Dust Bowl in the 1930s.

Before the crash, the economy had already been trending downwards, with unemployment rising and manufacturing declining, leaving stocks significantly overvalued. Then, on October 24, dubbed “Black Thursday,” investors sold nearly 13 million shares of stock, signaling to consumers that they had been correct about the lack of liquidity of assurance. Spending slowed, debt grew, homes were foreclosed on, and banks began to fail.

People were facing hard times, it was something that no one had ever witnessed earlier, and the new effects of the Recession. People were frustrated and had the most challenging time of their lives. But what is the definition of this term? Is it something related to our mental health or is it something completely different? Let’s find out.

Depression: Definition And Its Causes

Depression is a decline in GDP up to 10 %, and its end is always debatable. Some believe a depression ends when an economy begins to grow again, while others believe it ends when growth and output return to pre-crisis levels.

Depression is more severe than a recession, but an economic crash could give rise to the Great economic downturn. So, can we detect an economic meltdown or the next Great Depression?

If we closely monitor history’s past events and economic conditions, we can see that all the indicators turned red or downward.

All these indicators were giving a clear sign of the Great Depression. From the start till the end of the Great economic downturn, the US economy shrank by one-third. This event was a one-of-a-kind event that had never happened since 1929. But the current situation, in 2022, is very similar to 1929.

What Were The Causes of Depression in 1929?

The Great depression of 1929 turned out to be the longest economic downturn which is ever faced by the global population. There are several causes which came out to be the reason for this severe downturn.

The stock market speculation in the United States contributed to the great economic downturn. Many people invested in the stock market, raising prices to unsustainable levels. As stock prices reached new highs, investing in the stock market became a straightforward way to make money, and people of all income levels used a large portion of their savings to purchase stock shares. This resulted in a loss of faith in the economy and a dramatic drop in stock values.

The stock market crisis of 1930-1932 caused a wave of bank failures since many banks had significantly invested in the stock market and lost money when it plummeted. As a result, numerous people withdrew their deposits from their respective banks.

During the 1920s, the United States imposed high taxes on imported products, making it difficult for other countries to sell their commodities in the American market. As a result, foreign commerce fell, contributing to the worldwide economic collapse. The drop-off had contractionary effects in other borrowing countries, whose economies were in a recession.

There is a saying that “we can’t choose where we came from, but we can choose where we are going from there.” So we can’t change what we faced in 1929, but we can handle and plan for what’s on its way. But what is it? A recession or a depression? Is recession different from depression? Yes. Though the base point of both the economic situation is common, they do share some differences.

What Is The Difference Between A Recession And A Depression?

Let us find out the loopholes that made these two financial crises different from one another.

It could be seen in the economic activities, which are slowing down due to the higher level of inflation. Currently, we see the horizon of something devastating and brutal regarding economic stability. We are facing a crisis in the cost of living, tightening financial conditions in most regions, and Russia’s invasion of Ukraine weighs heavily on the outlook. The Market is shrinking, and the portfolio of investors is red, and again there is blood on the streets like it was back then. So, what options do investors have now?

What are the opportunities for the Investors?

All this Recession and Depression are part of a business cycle. Some way or the other, they are a part of this global world too. And no matter how scared or devastated we are about the situation, we need to stand strong against it so that we can become a lesson for the upcoming generation so that they can look upon us and prepare accordingly for the economic crash.

Higher interest rates at the start of a recession may allow you to earn more on your savings deposits. In contrast, lower rates as the Recession ends may provide opportunities to secure a favorable mortgage loan. You may also be able to purchase assets at a reduced cost after their value has depreciated. It could provide you with a new beginning.

Expecting something better from this crawling economy may sound very unrealistic. But there are brighter places even in the darkest times, and Secvolt is one of them.

It is a quant hedge fund that combines AI and IQ to help investors to safeguard their portfolios during impending crises. At Secvolt, you don’t have to be concerned about market risks since we have an effective risk management system in place to handle them. Secvolt is a secure and safe destination for your investments. So come and join us in witnessing a historic occasion and stand strong against it together.

Aakanksha Sharma is the Senior Content Writer for Secvolt, the hedge fund from Delaware. Hailing from a place known for its grandeur- Chittorgarh, India, Aakanksha brings along a perfect blend of figures & emotions. She completed her Bachelor's in Entrepreneurship, then went on for a year-long fellowship program with a national NGO. Having worked with a diverse clientele as a content writer & a businesswoman for two years post the same, she decided to leap into the finance niche. Aakanksha is a people person. She possesses a love for various forms of content. Time & again, you can find her having conversations while sipping on caffeine!