Winter Begins With Everything Steamy In The Crypto World 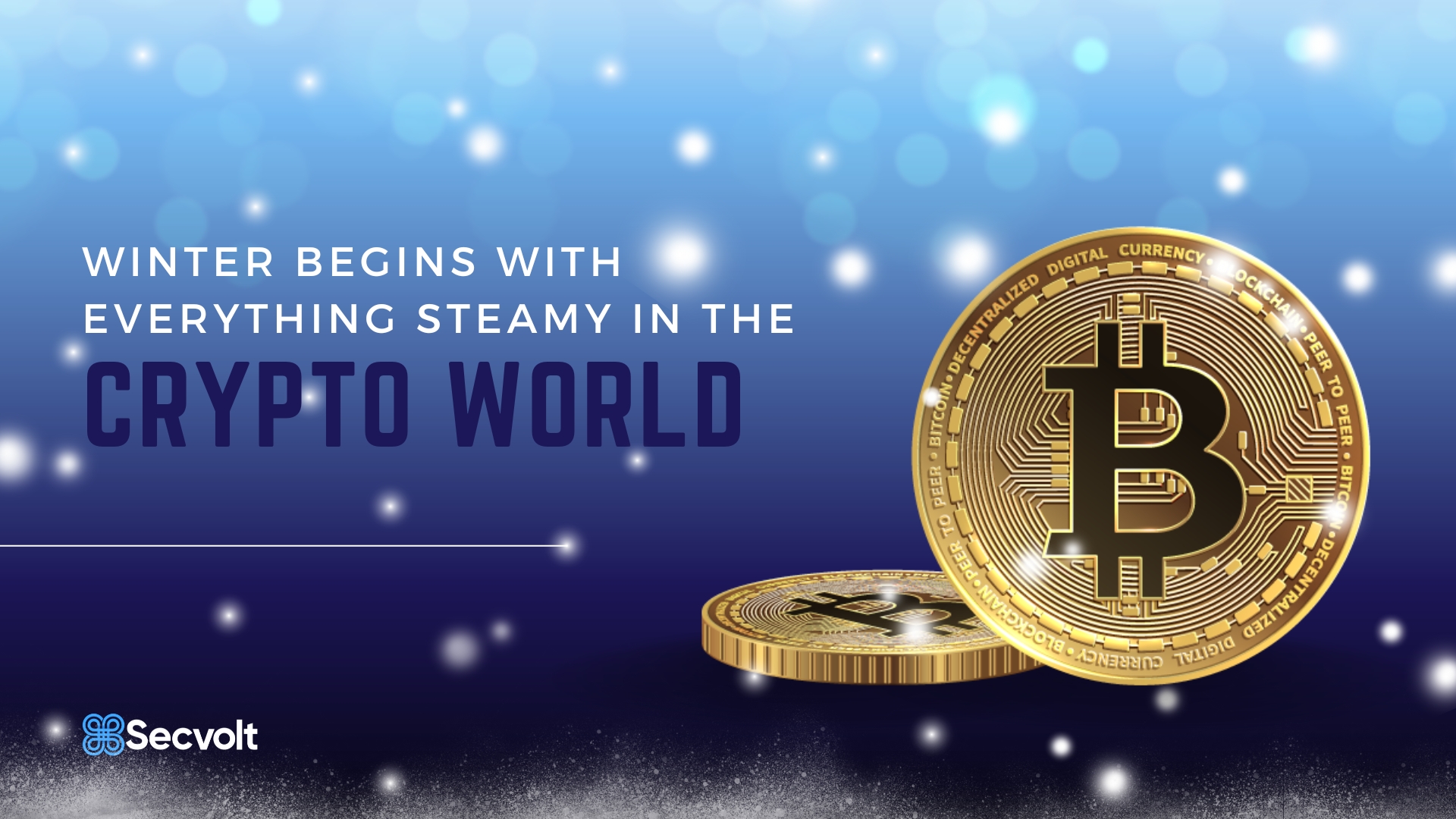 Last month was a roller coaster ride for the crypto industry, with many mishaps. So, let’s take a look back at some of the big events that occurred in the crypto world in the previous month.

Bitcoin And Ethereum Drop Due To Unrest In China

The 2022 China Financial Crisis is currently posing a problem for the crypto industry. Everything began on Saturday in Shanghai with the ongoing demonstration over covid restrictions, which drew all attention. Citizens gathered on the streets and university campuses to express their rage at local politicians and the ruling Communist Party. Every street was brimming with individuals assembled in various sections of Shanghai to demand President Xi Jinping’s resignation, a level of public anger unseen since he took office a decade ago.

After this incident, things went on a cliff, and then on Monday, a drop in crypto assets correlated with a drop in Asian and US markets. And Beijing’s ongoing Covid-zero mobility strategy, which was affected way back in 2020 and 2021, has some economic breakdowns. The strategy has intensified economic pressure by rising levels of youth unemployment. However, recent reports indicate that civil disobedience, marches, and clashes with police in Chinese cities and universities are causing worry in Asian financial markets.

How Is The China Crisis Affecting Bitcoin And Ethereum?

Investors were concerned about the appearance of riots due to the Covid-19 closure, which developed into unusual public displays of resistance against the ruling Communist Party. Following that, bitcoin and ether trade in Asia decreases.

Bitcoin and Ether have begun to decline in Asian trading. This was reflected by falls in Hong Kong and other equity markets.

All this contributed to a collapse in Asian markets, with Hong Kong’s Hang Seng Index plummeting 4% initially and finishing down 1.57%. The Shanghai Composite Index lost 0.75%, while Japan’s Nikkei 225 Index dropped 0.42%.

The Full Contagion Effect Of Ftx

Everything started when Coindesk released research papers claiming that most of Alameda Research’s assets are FTTs. Following this, Binance announced the sale of all of its FTT holdings valued at more than $500 million. As a result of the panic, all users began withdrawing all their cash from FTX, resulting in a liquidity crisis. Following that, FTX had to show that they had the assets they claimed and that the funds were used to bail out Alameda Research. This has resulted in a unique twist, as Binance and FTX have announced a deal to sell FTX to Binance. SBF was left with just one option: file for Chapter 11 bankruptcy in the United States and declare his firm and about 130 partner/sister entities insolvent with the company as now they are bankrupt.

This collapse occurred overnight, leaving the firm with an $8 billion financial hole this was the Effects of ftx collapse. The bitcoin exchange filed for bankruptcy within a week. There were losses all over the place, and anybody who encountered FTX suffered some kind of loss. Traders lost billions of dollars kept on the platform, which functioned as a marketplace for cryptocurrency experts to buy and sell tokens. Companies with FTX associations have also encountered financial difficulties. BlockFi, a cryptocurrency lending firm, filed bankruptcy on Monday, citing its links to FTX for its demise.

Many corporations have been required to declare their “exposure.” And especially the partners of FTX and its subsidiaries FTX US and Alameda Research after FTX filed for bankruptcy on November 11. This decrease was terrible for the crypto industry. This breakdown highlighted that just because it is the second-largest cryptocurrency exchange does not mean it is completely secure to trade and keep your assets safe. Traders began to question what was stopping other companies from following suit, especially given the severe circumstances, with exchanges like Crypto.com, which are already under attack.

Another bankruptcy occurred on November 28, and BlockFi revealed they had filed for Chapter 11 bankruptcy. In the District of New Jersey, the corporation and its eight subsidiaries have filed for bankruptcy.This action follows many days of uncertainty about the company’s financial condition following the collapse of FTX. BlockFi International has also filed for bankruptcy in the Supreme Court of Bermuda.

Firstly, a short introduction about the company BlockFI and what they are. Unlike banks, it offers USD loans to crypto-asset owners who collateralize the loan with their crypto-assets.Their solutions give liquidity to the blockchain asset industry and cater to the demands of individuals and institutions who own blockchain assets. BlockFi keeps its clients’ Bitcoin and Ether in the custody of a licensed custodian and provides them with USD loans to their bank accounts. Lending to individual investors and companies in 35 US states is now under beta testing.

BlockFi aims to deliver liquidity, transparency, and efficiency to digital financial markets by developing solutions that fulfill the demands of individuals and companies worldwide. They use a complex infrastructure that interfaces with numerous blockchains and intends to extend their product offering focused on retail and institutional customers.

After suffering an $80 million hit from a cryptocurrency hedge fund, BlockFi worked with FTX US. The firm was extensively exposed to previous FTX CEO Sam Bankman-empire. The company acquired a $400 million credit line from FTX US as part of an agreement that also allowed the firm to buy BlockFi through a rescue brokered by Bankman-Fried during the summer. And one thing was found BlockFi has also provided collateralized loans to Fried’s startup, Alameda Research.

Now the firm is the most recent to declare bankruptcy following a prolonged decline in digital asset pricing. The lenders include Celsius Network LLC and Voyager Digital Holdings Inc.

The emphasis of traders has shifted to wrapped Bitcoin, a variation of the most popular cryptocurrency that can be used on the rival Ethereum network. Wrapped Bitcoin is one-to-one backed by the token, which is held in custody by the digital-trust business BitGo. Wrapped Bitcoin, the 23rd most valuable cryptocurrency by total market value, sprang to prominence during the height of the decentralized financial boom. TThis version simplifies the trading, buying, and selling of these tokens in Defi for Bitcoin holders. Concerns that the wrapped Bitcoin may not be fully supported have triggered the price drop, given that Alameda Research, the trading desk co-founded by FTX’s Bankman-Fried, was previously the most significant merchant to issue the spinoff. BitGo executives denied the conjecture, stating on Twitter that all derivatives are backed 1-to-1 by Bitcoin and kept in custody by the company.

It usually trades at par with Bitcoin, but a “persistent” discount appeared in mid-November, according to blockchain-data firm Kaiko. The wrapped Bitcoin, ranked 23rd by market value, became popular during the decentralization boom. As a result of this version, Bitcoin holders are able to easily trade, buy, and sell these tokens in Defi. After Binance chief Changpeng “CZ” Zhao raised concerns three weeks ago about FTX, the Bloomberg Galaxy Crypto Index has fallen more than 25%.

FTX’s Bankman-Fried co-founded Alameda Research, the trading desk that issued the offshoot, once was the most prominent merchant to issue the offshoot, leading to concerns that the wrapped Bitcoin is not fully backed. BitGo executives dismissed the speculation, stating that all derivatives are backed one-to-one by Bitcoin they hold in custody.

As you can tell from the report, that’s how the month turned out for the crypto community regarding volume and volatility. Having reached this point, we are now ready to move forward. If you like this report, then follow Secvolt for more such updates related to crypto.

Secvolt is a quant-based hedge fund that provides a secure investment against market downturns. Secvolt employs quantitative analysis to invest your money in cryptocurrencies, resulting in a significant return on investment. You can tailor your risk size to achieve the best possible result.